A useful result of mapping complex numbers to the Riemann sphere is that elementary functions like z^2 and z^3 can be interpreted geometrically. 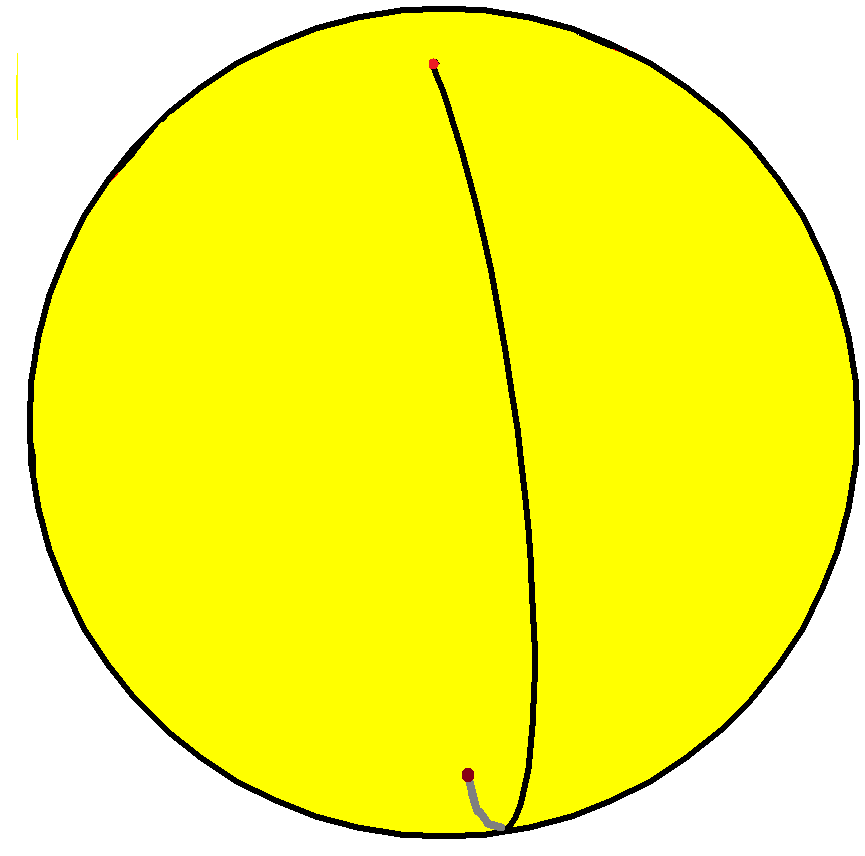 z^2 wraps the sphere around onto itself, take the one faced spherical polyhedron shown above, cut it along the shown arc and stretch it around itself, as if doubling the longitude coordinates, until you can sew it back up at the original cut. The space naturally pinches toward the two poles such that the transform remains conformal. This is z^2.
Similary, z^3 takes the two-faced spherical polyhedron and wraps it around onto itself, as if stretching the complex plane by tripling the longitude around for example the Greenwich meridian. 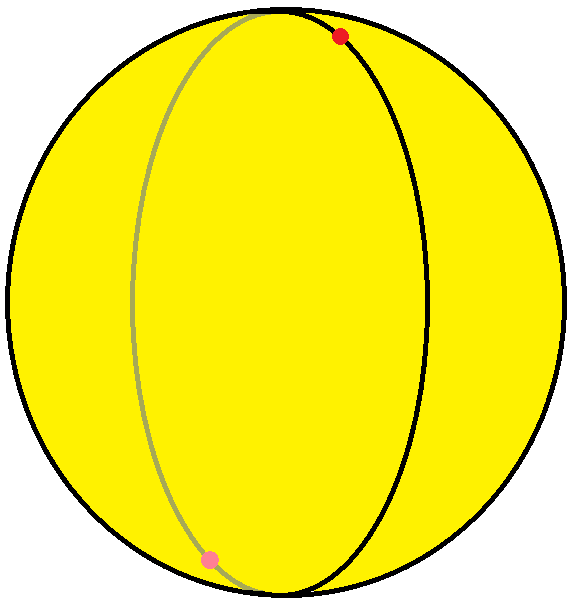 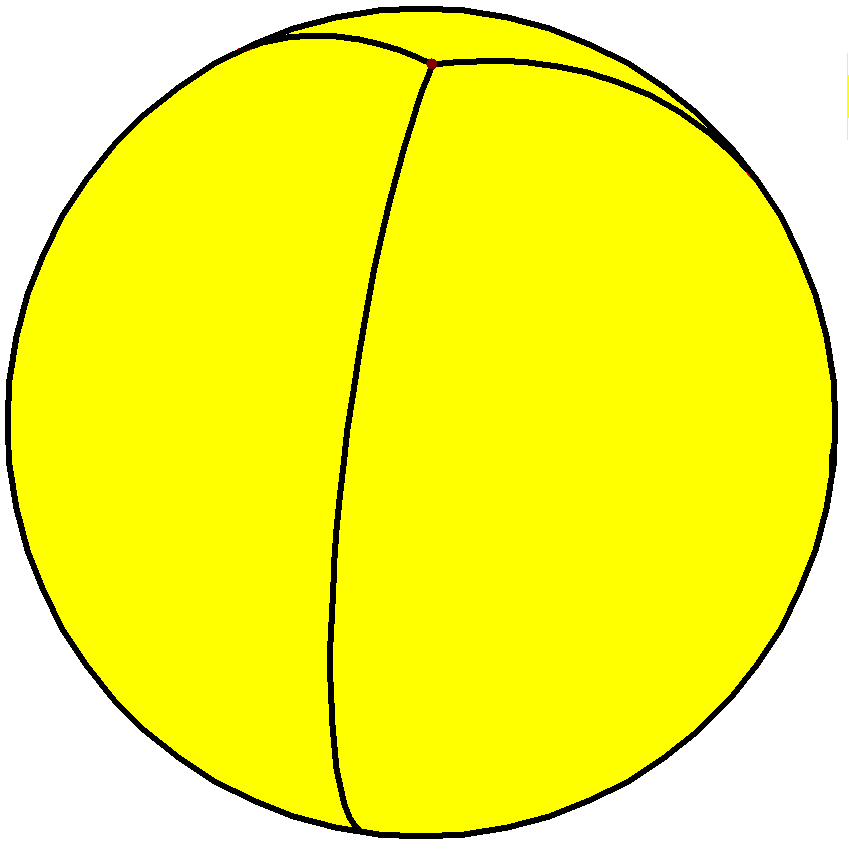 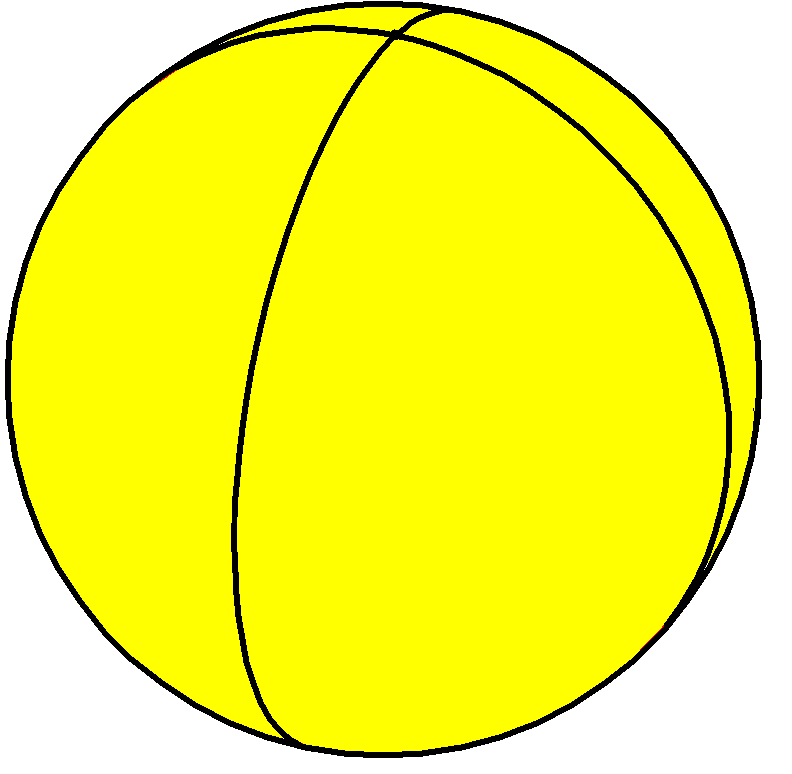 Given this interpretation, it is interesting to consider mappings that wrap other spherical polyhedra onto themselves. Afterall, while the first two example hosohedra are regular, the three and four faced ones are not. The four faced hosohedra is also an unstable partition of the sphere in some senses, the stable and regular four faced spherical polyhedron is a spherical tetrahedron:

So it is interesting that you can indeed wrap a spherical tetrahedron onto itself, and it does remain conformal. The function is this:

If the complex plane origin is point D in the above image then the constants in the numerator of the product are the vertices A,B and C. The constants in the denominator are the poles which map to the centre of the spherical triangle ABC, they are located at the centre of the three remaining spherical triangles.
The mapping can be visualised on the complex plane using David Bau's complex function viewer: 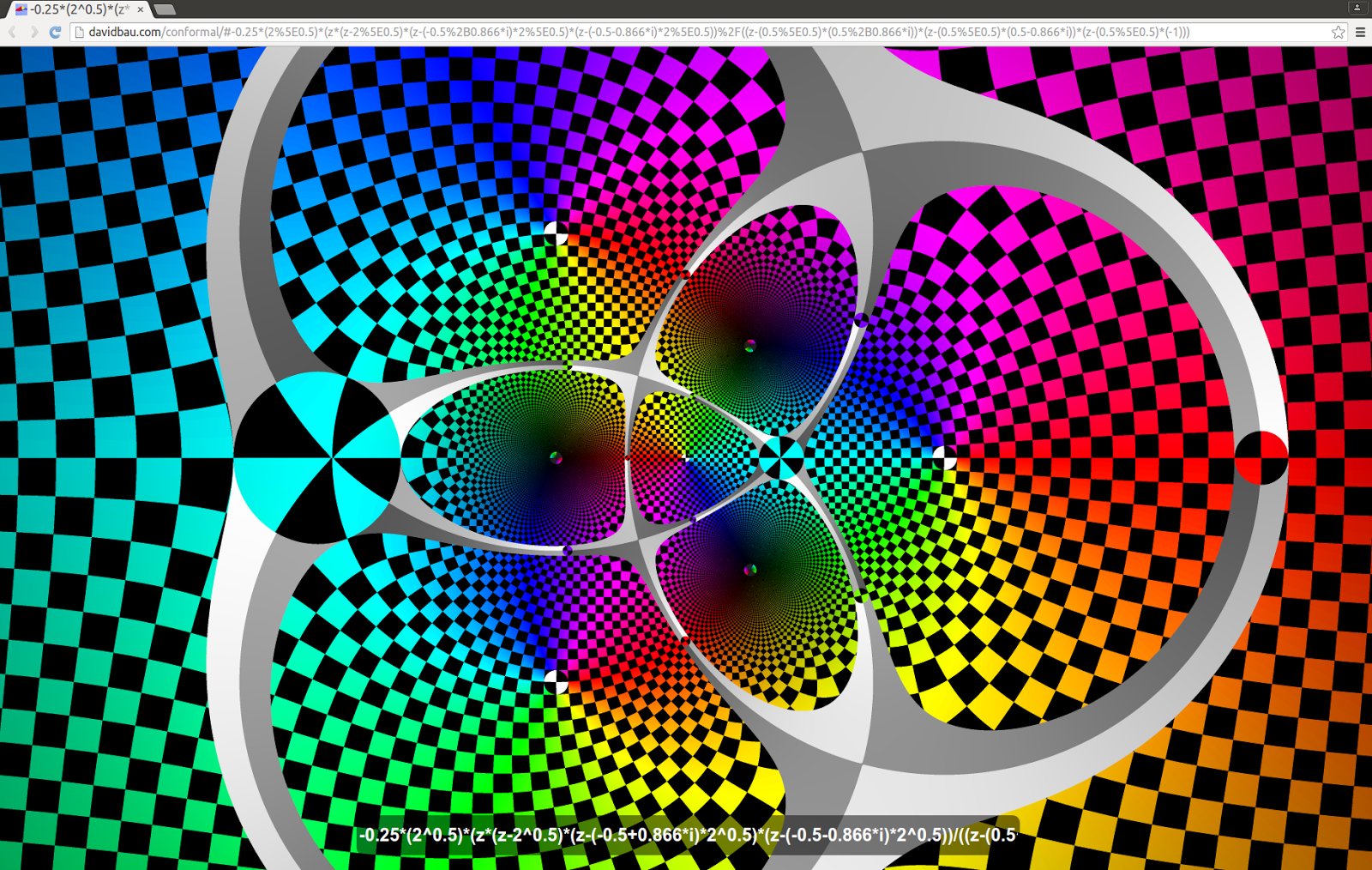 The grey circles are the unit disk in the complex plane, so you can see that this function can equally be seen to map a two sided spherical polyhedra (the the edge being the unit disk) to a spherical octahedron.
This animation I made shows the fold as applied to a non-spherical tetrahedron:

This tetrahedral wrapping function, for which I'll use the letter tau, can be simplified slightly if we allow it to wrap onto its dual tetrahedron (so removing the minus sign) and rearrange slightly to:

The mandelbrot set of this function requires care to visualise, unlike the standard mandelbrot set it doesn't bailout on large values. The only parts not in the set are those that hit a pole and so remain at infinity, you can do this by iterating the radius of the pixel, not just the point, and bailing out when either of the three poles are within this radius. Here I view it using Fractal Lab:

I find the look of this fractal to be quite different to others, even though you can clearly see mandelbrot elements within it. Here are two more close ups of the holes:

and here is part of the negative tau version:

You can also apply this function as a form of Mandelbulb fractal. In this case the transform operates on a real cartesian sphere around the origin, and the radius or each point squares each iteration, the mandelbrot version gives: 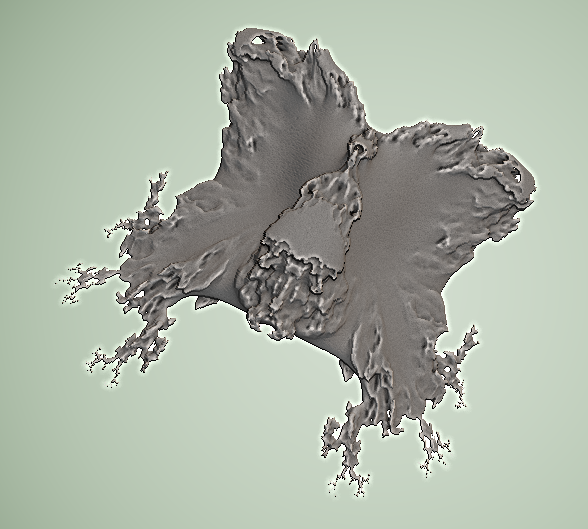 which was rendered using Fragmentarium.

While the above function is I think quite unique as a regular polyhedron that wraps onto itself, it is also possible to do so with a two-sided spherical polyhedron called a Dihedron {4,2} (which means four vertices and two faces): 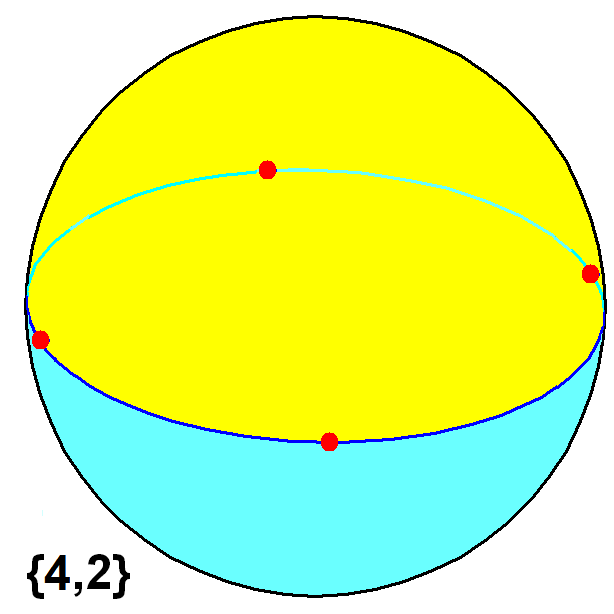 The wrap is similar to taking a square (with two sides, like an envelope) and folding in half then in half again to form a smaller square, but in our case it is done on the inflated/spherical surface.
The function is:

Which can be visualised here. You can visualise the mandelbrot set of it by using its reciprocal: 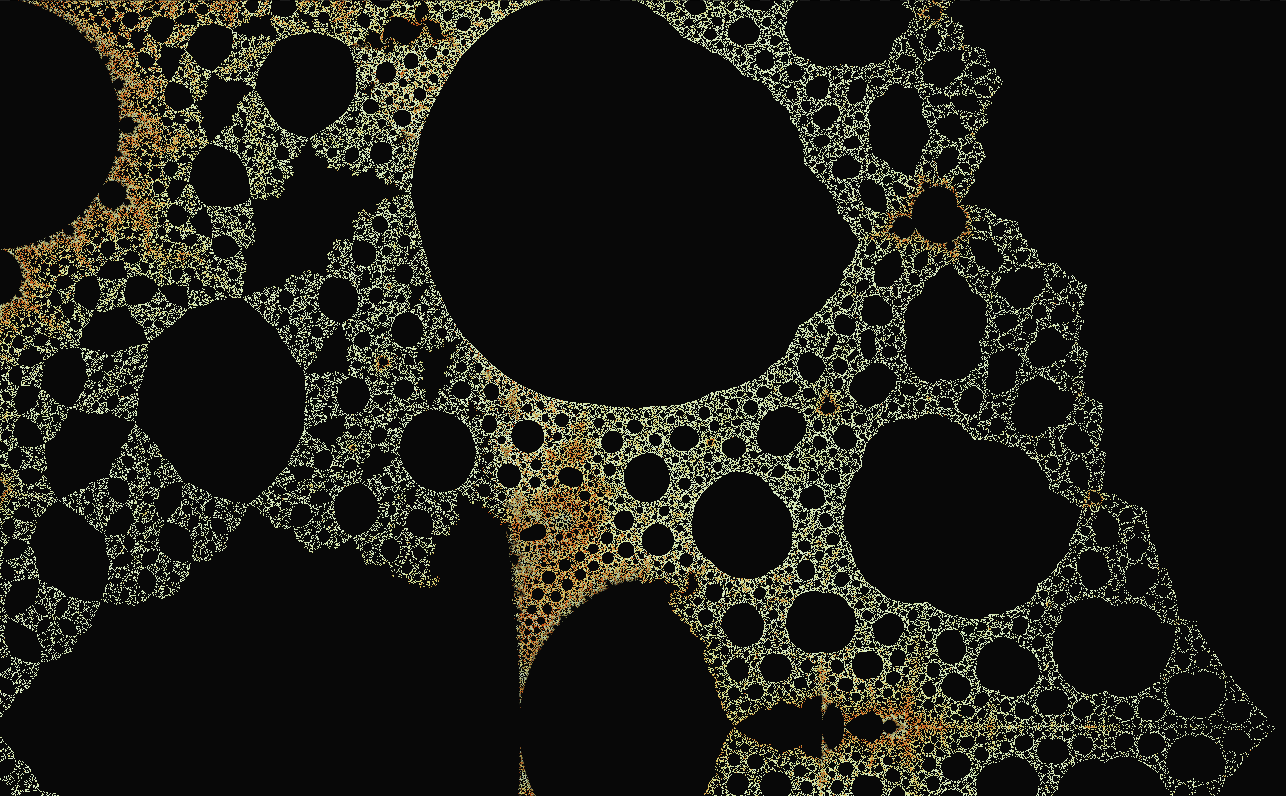 Wow, these are great pics.. and the negative version:

It also produces a mandelbulb which has some similarities to the tetrahedral version: 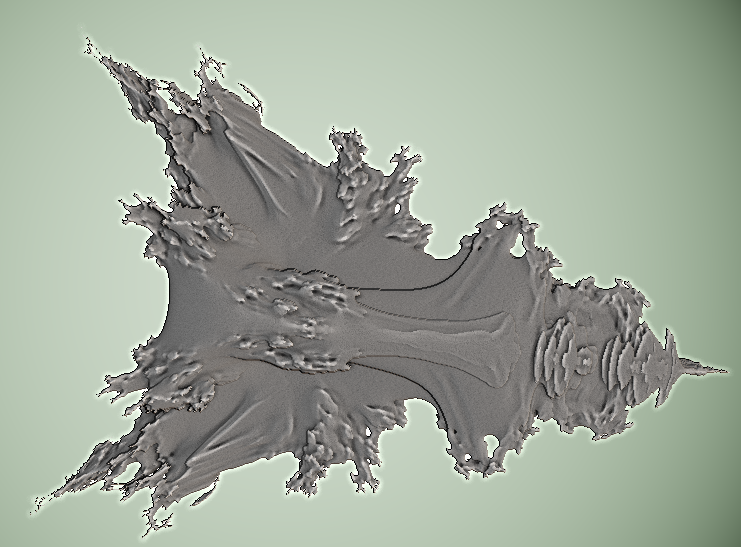